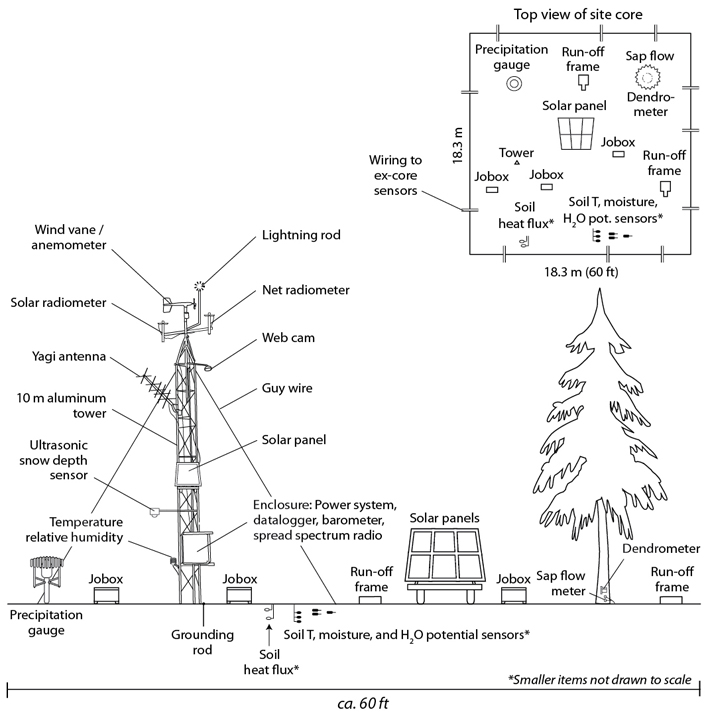 The equipment and sensors that make up each site of the elevational transects have been selected to monitor major hydrologic fluxes/flows and stocks, as well as key modulating ecological factors, processes and stocks. Each transect site is instrumented with a common set of equipment and sensors. At lower elevation, non-forest sites,all sensors are mounted on a 10 m guyed tall meteorological tower (UT30 Tower,Campbell Scientific Inc., Logan, UT). At higher elevation forested sites, the 10 m tower is placed in a forest gap to measure wind speed and direction, PAR, total solar radiation, and precipitation. The solar panels providing the majority of the station power are mounted on separate support legs near the towers.

Each monitoring station is located within an approximate 100 x 100 m (one hectare) homogeneous area. One hectare (a) allows complete and accurate representation of the plant communities found at each elevation, with multiple repetition of plant community units; (b) is an appropriate scale for modeling purposes that rely upon satellite data and other gridded data; and (c) provide sufficient space for establishing replicated experimental plots for future studies (e.g., precipitation treatments including irrigation or rain-out shelters; snow removal/addition treatments; simulated aerosol deposition on snow surfaces).

Data measured at each site are collected via sensors hard-wired to Campbell Scientific Inc. multiplexers and data logger(s). These data are then transmitted in real time via a Free-Wave spread spectrum radio (e.g., 900 MHz) to nearby base stations of either UNR’s seismological broadband network/microwave backbone (Sheep Range transect) or via a radio link built between the lower elevation sites in the Snake Range transect and the highest elevation site that transmits data to a base station antenna located at Great Basin College in Ely, Nevada. All data is eventually transmitted to the data portal constructed by EPSCoR’s cyber infrastructure group. The data portal provides public access to real time and archived data as well as general information about the project.

Sensors at each tower location are being used to continuously track a number of variables, meterological, abiotic and biotic (listed below) that not only enable assessment of climate variability, but more importantly provide information on hydrological and ecological response to climate variability. For example air temperature and air relative humidity (Campbell HMP50, manufactured by Vaisala) are being measured that allow calculation of evaporative demand of the air (vapor pressure deficit, VPD, a factor that strongly influences leaf stomatal conductance and transpiration, Bunce 1982; Oren et al. 1999; Körner 1994). Other variables measured include: